About the Global Experience Series 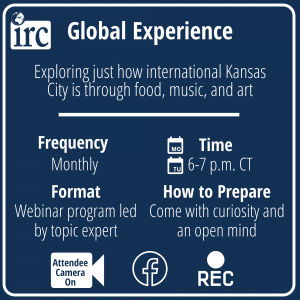 Global Experience programs give participants of all ages, interests, and backgrounds the chance to explore how international Kansas City is while answering two key questions – What’s your global story? Do you get the chance to share it?

Often free or low-cost, Global Experience events range from visits to internationally-themed restaurants and other outings to film screenings and discussions on timely global issues. As interesting as the topics and venues are, the best part of Global Experience programs are the hosts and participants who share their diverse knowledge and insights. Won’t you join us for this introduction to IRC programming and Kansas City’s vibrant international community?

Tuesday, August 23
The French Art of Tea: Culture to Cultivation

A Tour Through China
IRC Member Kirk Doan will take us through a photo tour a trip he took in 2008 to China to attend the Olympics. He will tell stories of his travels, provide historical context on the sights he saw, and discuss his recommendations for those who may wish to travel to China in the future.

Un Cafe Colombiano
Start your day with a Colombian gastronomic and cultural discussion, live from Bogotá. Global Experience programs give participants of all ages, interests, and backgrounds the chance to explore how international Kansas City is while answering two key questions – What’s your global story? Do you get the chance to share it? As interesting as the topics and venues are, the best part of Global Experience programs are the hosts and participants who share their diverse knowledge and insights.

As part of the IRC’s Global Experience Series, we will be welcoming Chef Fernanda Reyes of Taco Naco KC to present a Mexican cooking class. Chef Reyes will be preparing a vegan taco that includes cauliflower with pipian in blue corn tortilla. The program will give basic instructions for preparing the dish, as well as provide an opportunity to learn more about Mexican cuisine and the culture around it.

Members of the Yan’an Sister City committee will present a Chinese cooking class as part of our Global Experience series. The event will take place virtually on Zoom and also be simulcast to Facebook.

Not all hot herbal beverages can be categorized as tea. Tea comes from the tea shrub (Camellia sinensis). From this plant black, pu-erh, oolong, green, yellow and white teas are made. Tisanes on the opposite are often wrongly referred to as ‘herbal teas,’ but since they don’t come from the tea shrub, they’re not truly tea.

In this workshop, lead by Emile Jackson of Emile’s French Teas, you will learn the differences between teas and tisanes, how to brew them, and tasting the nuances of three different kinds.


Drawing from Central Asian, Middle Eastern, Eastern European, Armenian and Balkan cuisines, Turkish cuisine reflects Turkey’s role as a bridge between Europe and Asia. Its use of a large variety of fruits and vegetables and seasoned meats and stews makes Turkish cuisine appeal many palates. To guide our journey through Turkish food, what it represents, and the culture of Turkey, we will be joined by Serife Vural. >>


Few cuisines have the notoriety and romance of France. A diverse cuisine that has influenced culinary approaches across the globe, French food can perhaps feel like an intimidating undertaking at first glance. IRC Member and former French Honorary Consul for Western Missouri and Kansas Cyprienne Simchowitz will break down both the food and the culture of France, while giving you a new recipe to try at home.


As we are stuck at home there is perhaps no better time to pick up a new recipe or two! As part of our Global Experience series, Aparna Suresh will be conducting an Indian cooking class.

As we are stuck at home there is perhaps no better time to pick up a new recipe or two! Paola Ghezzo conducted an Italian cooking class with Risi e Bisi (risotto with peas) as the featured dish.

Participants explored Taiwanese cuisine by tasting and learning about the process of preparing four dishes. The goal of the event was to offer insight to cooking healthy, simple Taiwanese dishes that you can prepare yourself at home.

Participants joined the women of Kansas City’s own Tamale Kitchen for this special hands-on introduction to the culture, assembly, and enjoyment of traditional tamales – a holiday staple.

Around the World in a Pint Glass

Founded in 1988, and currently under the control of a Belgian parent company, the Boulevard has long been a Kansas City icon known for its diverse and flavorful beers. This event allowed participants to celebrate Oktoberfest right here in Kansas City, while sampling some of the best beverages around.


Participants enjoyed an informal discussion with former Ambassador Jose Vicente Pimentel, who shared about his extensive experience in the Brazilian diplomatic service, including stories of his time at various postings: D.C., Santiago, Paris, Rome, Guatemala, New Delhi, Pretoria, and Toronto. In the process, we gained a richer understanding of Brazil and its foreign policy, as well as the country’s bilateral relations with the U.S.

For over 50 years, Sister City International (SCI) has served as a catalyst for international understanding and community development, honoring a legacy of citizen diplomacy begun by President Eisenhower in 1956. Based on a true story, this film is about a World War II military supply road built collaboratively by China and Myanmar and the power of the project to bring together diverse communities.

A Tour of Chile Through Wine

Chile is one of the world’s largest producers of wine, where it has been made since the 1500s. Participants learned about the history and the current landscape of the Chilean wine industry and the role the industry plays in Chile’s broader economic, social, and geopolitical landscape; heard the personal stories of the founders of Sur del Mundo Imports; and, had the chance to taste four different Chilean wines (one white, three reds).

Working Across Countries and Cultures: What It Means for Entrepreneurs

We heard from a diverse panel of individuals who have worked internationally or taken their work abroad as they shared lessons about entrepreneurship and working across cultures.

Topics included the history, sourcing, and cultural meanings of tea around the world. After the presentation, participants were encouraged to taste free tea samples, ask questions, and discuss this delicious beverage with fellow attendees.

Join the IRC as we get hands-on cooking instruction from our friends at the Thai Cultural Center of Greater Kansas City, an organizational member of the IRC. After the food is made, be sure to stick around to enjoy the fruits of your labor.

We attended the Xi’an and Yan’an Sister Cities Committees’ film showing of Paths of the Soul (original title: Kang Rinpoche). Following the film, there wasa post-film discussion, and then IRC attendees were invited to relocate to a nearby restaurant for lunch. This film covered the journey on foot of a group of Tibetans on a 1,200 kilometer pilgrimage to Lhasa, the holy capital of Tibet. As their Tibetan Buddhist faith requires, they prostrated themselves every few steps, making their long walk an act of utmost religious devotion. Director: Zhang yang – Language: Tibetan with English Subtitles

In September 1945, the freshman senator from Arkansas, J. William Fulbright, introduced a bill in the U.S. Congress that called for the use of proceeds from the sales of surplus war property to fund the “promotion of international goodwill through the exchange of students in the fields of education, culture, and science.” One year later, President Harry S. Truman signed the Fulbright Act into law. Today, Fulbright is the most widely recognized and prestigious international exchange program in the world, supported for more than half a century by the American people through an annual appropriation from the U.S. Congress and by the people of partner nations. The program—working with universities, schools, binational Fulbright commissions, government agencies, nongovernmental organizations and the private sector—actively seeks out individuals of achievement and potential who represent the full diversity of their respective societies and selects nominees through open, merit-based competitions.

On Thursday, May 3, we ventured where no IRC event had ventured before: from the forests of Brazil to the fields of Ethiopia, we learned about the international nature of Kansas City’s favorite drink. Through an exclusive tour of The Roasterie offered to IRC participants, we heard about the global context of the coffee industry, including its political economy, distribution, & supply chain.

Park University, the National Archives, and the IRC partnered to explore the story of 91-year-old Sonia Warshawski – great-grandmother, businesswoman, and Holocaust survivor – who has deep ties to Kansas City.