About A Novel Experience 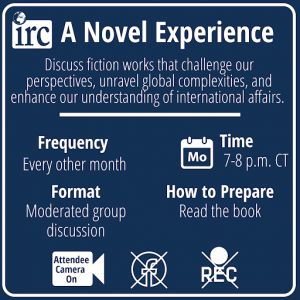 In our fast-paced, information-heavy world, carving out time for fiction can be seen as a luxury. But novels aren’t just for pleasure – they can challenge our perspectives, unravel global complexities, and nuance our understanding of international affairs. Every other month, the International Relations Council invites you to A Novel Experience: curl up with a novel of the world or about the world before meeting with other bibliophiles to share your insights and curiosities. We’ll have the help of subject-matter experts during our discussions and welcome your active involvement in this international literary journey. Individuals of all backgrounds, interests, and perspectives are welcome – we just ask that you bring an open mind, thoughtful questions, and common courtesy. Registration is free but helps us with planning.

In Leaving Tangier, award-winning, internationally bestselling author Tahar Ben Jelloun tells the story of a Moroccan brother and sister making new lives for themselves in Spain. Azel is a young man in Tangier who dreams of crossing the Strait of Gibraltar. When he meets Miguel, a wealthy Spaniard, he leaves behind his girlfriend, his sister, Kenza, and his mother, and moves with him to Barcelona, where Kenza eventually joins them. What they find there forms the heart of this novel of seduction and betrayal, deception and disillusionment, in which Azel and Kenza are reminded powerfully not only of where they’ve come from, but also of who they really are.

The Shape of the Ruins
by Juan Gabriel Vásquez

The Shape of the Ruins is a masterly story of conspiracy, political obsession, and literary investigation. When a man is arrested at a museum for attempting to steal the bullet-ridden suit of a murdered Colombian politician, few notice. But soon this thwarted theft takes on greater meaning as it becomes a thread in a widening web of popular fixations with conspiracy theories, assassinations, and historical secrets; and it haunts those who feel that only they know the real truth behind these killings.

This novel explores the darkest moments of a country’s past and brings to life the ways in which past violence shapes our present lives. A compulsive read, beautiful and profound, eerily relevant to our times and deeply personal, The Shape of the Ruins is a tour-de-force story by a master at uncovering the incisive wounds of our memories.

Drive Your Plow Over the Bones of the Dead

In a remote Polish village, Janina devotes the dark winter days to studying astrology, translating the poetry of William Blake, and taking care of the summer homes of wealthy Warsaw residents. Her reputation as a crank and a recluse is amplified by her not-so-secret preference for the company of animals over humans. Then a neighbor, Big Foot, turns up dead. Soon other bodies are discovered, in increasingly strange circumstances. As suspicions mount, Janina inserts herself into the investigation, certain that she knows whodunit. If only anyone would pay her mind . . .

A deeply satisfying thriller fairy tale, Drive Your Plow over the Bones of the Dead is a provocative exploration of the murky borderland between sanity and madness, justice and tradition, autonomy and fate. Whom do we deem sane? it asks. Who is worthy of a voice?

Interpreter of Maladies is a book collection of nine short stories by American author of Indian origin Jhumpa Lahiri published in 1999. It won the Pulitzer Prize for Fiction and the Hemingway Foundation/PEN Award in the year 2000 and has sold over 15 million copies worldwide.