The Middle East Beyond the Headlines

The University of Central Missouri (UCM) offers a wide variety of study programs for students to take advantage of while in school. One of these programs is “The Middle East Beyond the Headlines” which is a three-week, faculty-led tour to Jordan, Israel, and the West Bank. I participated in this program in the summer of 2018 and could not have been happier with the knowledge and growth I took back with me. 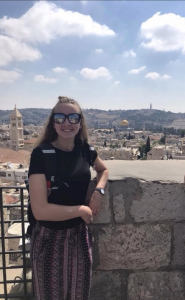 The purpose of this specific program is to break the common stereotypes that people have regarding the Middle East. For example, when telling my family and friends that I was traveling to this area of the world, they expressed concern or even fear for me rather than sharing in my enthusiasm. They would say things such as, “Why would you want to go there?” or, “Don’t you know that they will not like you?” and other questions and comments. I responded to this by telling them that not only was I very excited for my first international experience, but I was also looking forward to everything I knew I would learn.

The study tour was phenomenal. It begins in Amman, Jordan, with excursions to Petra, Wadi Rum, Jerash, and others. After Jordan, you go to Tel Aviv, Israel, and see a very different side of the Middle East, despite the two cities being only a short bus ride apart from each other. Jerusalem is the last stop on the tour, and my personal favorite. It is an historical and cultural melting pot, with friendly people and so much to soak in. The program provides a healthy balance of lectures and tours with free time for students to explore the cities or book their own excursions. This program does help to break the stereotypes students might hold going into it. You learn that the region is not just a desert, that people are actually quite hospitable and want to get to know you, and it is more than just the conflict that is always being portrayed in the media.

Participating in this program helped me to realize how much I love learning about the Middle East region. After studying abroad for a second time, I returned to school and knew I wanted to continue learning as much as I could about the culture, and I declared a minor in Middle Eastern Studies. Next summer, I will be returning on the same program to Jordan and Israel to conduct field research for a project. I am very excited to see where this takes me and how I will be able to develop a career for my future.

About the Author
Mikayla Elia is a junior at the University of Central Missouri studying Anthropology with a minor in Middle Eastern Studies. She in interested in nonprofit work and was a part of Nonprofit Shadow Day at the IRC.