Taking a Moment to Stop and Listen

It is safe to say that taking a solo trip abroad is a daunting, yet rewarding experience. It is a challenge I decided to take following graduating from undergrad. While traveling abroad alone is not unique as more and more recent graduates seek similar travel experiences, one particular encounter I had while walking in Germany has stuck with me ever since.

I was in Freiburg, Germany as one of my stops on my trip. While looking to do touristy things as any good tourist does, I heard of a gondola which takes riders up a hill in the Black Forest for some remarkable views. I met a fellow traveler from Australia who happened to be looking for the same gondola. After some planning we set off to where we believed the gondola was located. We first took a ten-minute train ride to a small town just outside of Freiburg, and believing it was only a short walk away, we set off on foot.

After 20 minutes of walking, we still did not know where the gondola was located. We soon found ourselves outside the small town, walking by a field with one last house on the other side of it. We came upon the house and a dog was barking at us from behind the fence.  Rather surprisingly, an elderly woman walked out of her house, through her front gate, and approached us. At first, my travel companion and I looked at each other as if we were about to be scolded. However, the woman quickly smiled and asked us how our day was. At the time, my German was good enough to say hello, and explain who we were and what we were doing there. 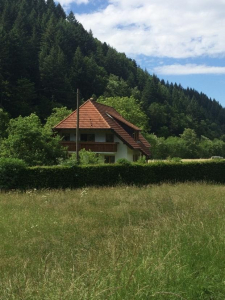 Thirty minutes later we were all still talking as I tried my best to translate what the woman was saying to my new friend from Australia. The woman often apologized for not speaking English as she told us about her childhood, growing up in the midst of WWII. It was fascinating to hear about her experiences and perspectives as a German citizen during the war. I was also surprised at her openness to talk to us about her life and share her story with complete strangers from different countries. We both shared a bit of our stories as well, but her story was far more interesting.

As we left and stepped onto the bus, I quickly turned and took a photo of the house. I hardly remember all the details of the day beyond our conversation. It was a valuable lesson to take the time and listen to people’s stories, particularly from people of different backgrounds. Since then, when I encounter an opportunity to hear someone’s perspective, I make an effort to stop and listen. The real value of that day was not the views from the gondola, but the insightful conversation with someone happy to share their story with us.

About the Author
Michael Bene is a former International Relations Council’s Project Management intern, and a Law student and a Master’s student in Economics at the University of Kansas.