In Memory of Eliot S. Berkley

It is with great sadness that we inform you that Eliot Berkley, founder of the International Relations Council, passed away on Sunday, September 16.  Eliot’s legacy is this very special organization, which has worked since 1954 to educate and connect Kansas City to the world. Eliot saw the need to bring ambassadors, Foreign Service officers, authors, and educators, among others, to Kansas City to provide the highest level and most up-to-date information about international affairs to Kansas Citians.  He started that effort with Eleanor Roosevelt, who was IRC’s first speaker in January of 1955.

Since that beginning, Eliot worked for more than 50 years to bring several hundred experts to us.  For many years, Marcia Berkley worked side-by-side with Eliot, hosting dinners and meetings in their home. Eliot also collaborated with the area universities and civic leaders to make IRC programming both timely and relevant. Eliot served as the Executive Director of IRC until 1994 when he retired.  He continued as the Chairman of the IRC Academy and as the only permanent board member.  Eliot was especially proud of IRC’s annual Awards Banquet.  We hosted the 29th Awards Banquet just last week, with David Petraeus as our honoree.  He worked tirelessly to bring a high profile, deserving honoree to Kansas City and to enlist the support of the community for this big event.

Eliot received his B.A. from Harvard University in 1947.  He earned an M.A. (1949) and a Ph.D. (1952) from Princeton University.  Eliot taught history and government at the University of Kansas City, now UMKC.  He then taught social science at the Kansas City Art Institute.  He also served as Vice President for Development from 1960 to 1961 and Dean of the College from 1961 to 1965.

If you would like to share a memory of Eliot with us, please submit them here or email them to irc@irckc.org.  We will publish some of your memories here in order to honor Eliot’s life and contributions to Kansas City.

“I had the pleasure of knowing Eliot since 1975, and the privilege of attending a number of IRC meetings over the years when I worked for the World Bank. He was a most honorable gentleman, with a keen understanding of the forces at work in U.S. foreign affairs, and an appreciation for the true spirit of public and community service. I am deeply saddened by his death.”

“On behalf of People to People International, I extend heartfelt condolences to Eliot’s family, colleagues, and to his many friends around the world. Our community is richer for his service and his vision. Our world is richer for his remarkable efforts to connect us. Our lives are richer because we knew him. As we celebrate a life well lived, it is certain that Eliot’s legacy will be felt for countless years to come.”

“Eliot was a real treasure. It was my pleasure and privilege to get to know him in the years before I moved from Kansas City, when I was the Director of the ACLU of Kansas and Western Missouri. I’m a better person for having known him and we, those who have been influenced by him, are better Americans for having had that opportunity. Rest in peace, Eliot.”

“As a long time member of the Advisory Board for the Office of International Programs at the University of Kansas, Eliot Berkely supported our mission to promote campus wide internationalization with his sage advice, the sharing of his own commitment to the understanding of international affairs, and with his generous financial support. His life exemplified the often cited expression, think globally, bur work locally. He will be missed not only in Kansas but at KU as well.”

“I started my career as Assistant Director at IRC on Eliot’s birthday in 1981 and stayed till 1993. Through those many years, I received a wonderful education from Eliot. He enlarged my view of Kansas City and the world. He was so dedicated to IRC and his family. Our community has benefited greatly from his tireless efforts. Eliot will be missed by many. I will forever be grateful for the opportunity to work and learn from such a giant.”

“Eliot was a wonderful friend… and an inspiration. He welcomed me back to Kansas City over 20 years ago and inspired me to become active in the IRC. Over the years, I enjoyed the hours spent with Eliot and Marcia. The conversation always was interesting and the warmth always there. I will miss them both.”

“Eliot was very kind and considerate to ALL people. At Marcia’s reception, he knew that I was an IRC volunteer and talked about upcoming events, acknowledging the role that I played. Eliot made me feel just as important as anybody else. At events, Eliot was always gracious. Eliot was a wonderful person in many ways. He will be missed.”

“Chris and I recall Eliot Berkley as a man of impeccable manners with a ubiquitous curiosity. For us, exchanging a few thoughts with Eliot always was the highlight of an IRC function, regardless of who was the featured speaker. His reverence for the accretion of human understanding was reflected in our conversations by his frequent references to his library of which he was so proud. He was an optimist, a believer in the betterment of the human condition through the liberation of the human intellect, and a champion of Kansas City’s integration into the global community. He will be sorely missed.”

“Eliot Berkley was an incredible asset to the KC community, with well over 50 years of civic contributions, most visibly of which was the heart and soul that he and Marcia poured into IRC. Intelligent, personable, passionate and committed, what I will remember most about Eliot is the friendship that he extended to me. Over the eight years I lived in KC, I was privileged to call him friend and enjoy his company. RIP, dear Eliot. My most sincere condolences to your family.”

“Eliot donated time and money to HateBusters. I went to him often for advice. He made life better for us all. I will miss him deeply.”

“I do not know Dr. Berkley in person, but I have been on IRC list serve for quite sometime now, and even attended a few activities organized by IRC. Based on what I know, I think everyone familiar with IRC activities will agree with me that…Dr. Barkley was ahead of his time in the early fifties when he dreamed–up IRC. May the soul of the peace maker rest in peace!!!”

“I will always remember Eliot as a soft spoken Kansas City treasure, and that the Nation has lost a great citizen who always stood for peace on earth. His memory will truly be a blessing for all who knew Eliot. May his soul rest in peace.”

“Eliot was one of my best friends. He was a kind and thoughtful man and one of the most interesting persons I have ever known. I got a big kick out of his frequent phone calls to people he didn’t know, like a fellow Harvard grad he read about in the alumni newsletter, or someone in the news who shared his concern about an issue. He told me how as a teenager he met Eleanor Roosevelt, who graciously told him to stop by and visit her if he came to Washington — he did! Eliot’s love of people and conversation, and his constant curiosity, helped make him a great Executive Director of the IRC. Nan and I loved Eliot and Marcia, who was one of the nicest persons either of us had ever met. We will miss both of them forever.”

“Memorable lunches with a true friend and world citizen.”

“I first met Eliot in 1972 when I came to Kansas City to work for Hallmark at Crown Center.Having served at US Embassies in the 1960’s I was delighted to share his enthusiasm for international relations and quickly joined IRC. I relish the memories of participating in wonderful small discussion groups with Eliot and others in those early years. I enjoyed all the phone calls from Eliot over the years whether to encourage me to buy a table for a function or to rejoin IRC, or to quiz me on sales in his subdivision. He was a great man who make a great contribution to IRC and Kansas City.”

Eliot & the IRC Through the Years

Click a photo below to open the gallery and learn more. 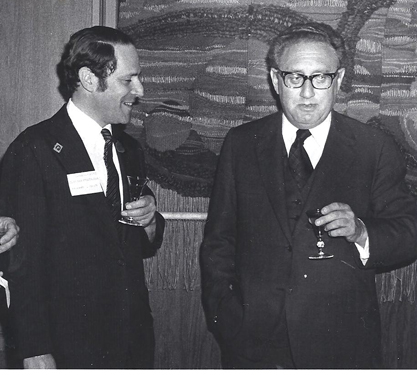 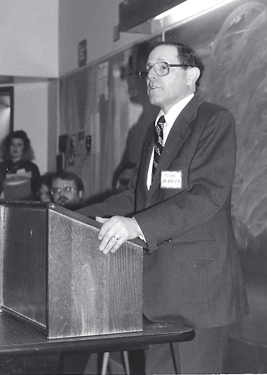 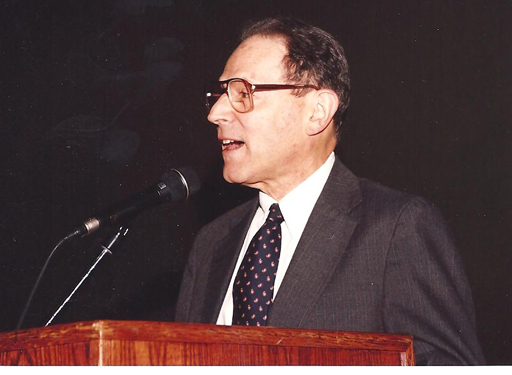 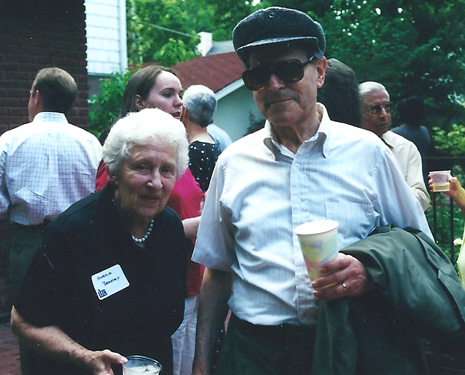 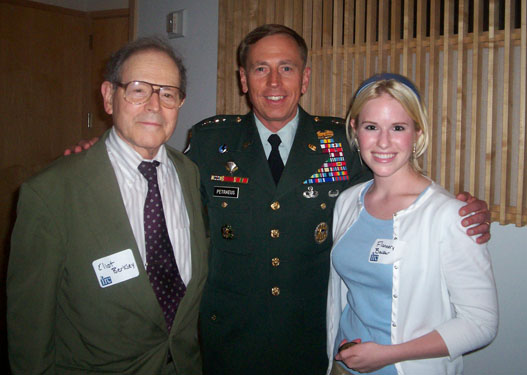 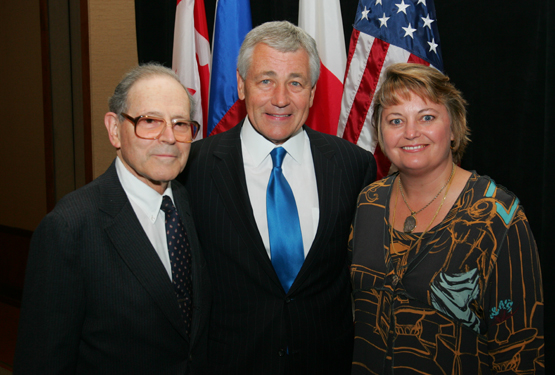 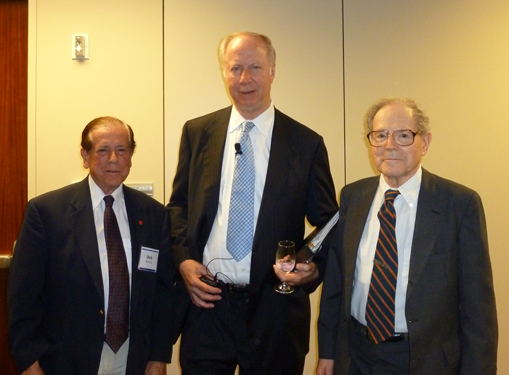