Home/World Citizen Blog/No Iranaphobia For Me
No Iranaphobia For Me
We tend to fear what we know little about, especially if we choose to have limited sources for gaining knowledge about the world. Recently, having returned from a two week trip to Iran sponsored by Global Exchange, I was delighted and privileged to learn more about this rich and ancient history and to witness first-hand the warmth and engagement of the people. Since having made the decision to go last February, I must say that I did have some trepidation as the verbal exchange between the U.S. and Iran seemed to be heating up in intensity over the summer months. Also, I have never traveled to a country that the U.S. State Dept. labeled as Level 4, with the warning, “Do not travel to Iran due to the risk of kidnapping, arrest, detention of U.S. citizens.”
There is no doubt that average Iranians are affected by the sanctions, especially the ability to get medications needed for serious medical issues. Iranians are resilient, though and go about their daily lives. Many of whom I spoke with are hoping for regime change. I was told by several sources that approximately 90 percent of Iranians want a new form of leadership. Much the same as many of us seek in the U.S. for our own government. 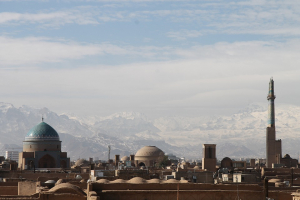 Despite not speaking Farsi, I experienced a group of several women picnicking in Isfahan by a river bridge park and as I walked by and smiled and they smiled back, one of them gestured to me to join them and partake of their food. Never having received an invitation like that in a Kansas City park, I was pleasantly taken aback.
Two experiences of oppression stayed with me, though. One was my sadness and frustration about the Islamic State’s mandatory head coverings, at the risk of jail for all older girls and women. I also felt the palpable anxiety at the designated areas where the military were present and photos were not allowed, including outside the American Embassy and the notorious, Evin Prison. This is a foreboding sight for Iranians and foreigners alike. Since childhood, I have always been one to engage in minor juvenile delinquency, but I knew this was not the time or place for me to test the rules.
There is one thing people will not do – they will not stop going about their daily lives and taking care of their families, all while hoping for improved conditions. They tell you with pride and sincerity that they have not attacked or invaded another country in over 200 years. We know many countries who cannot say that. The Iranian people have a pride in their country and resiliency about them that is to be admired. I witnessed this in other places where I have traveled, throughout the West Bank in Palestine and in the countrysides of El Salvador. If only governments were as earnest as the citizens they are supposed to be leading.
About the Author