KC to Seville, Spain and Back Again

I have always been an introverted person with just enough self-awareness to know which baby steps to take in order to reach my goals that were outside of my comfort zone. I knew I wanted to travel the world. Creating new memories, meeting new people, and experiencing different cultures abroad was something that I always wanted to do. So, when I was in high school, I talked my mother into going on a faculty-led trip with me to Spain. She agreed. A few months later we landed in Madrid and made our way south to Malaga, stopping in Seville and Granada along the way. There is not much I remember about the trip as it was about 15 years ago, but I do remember falling in love with Spain, more specifically Seville, and promising myself I’d return. 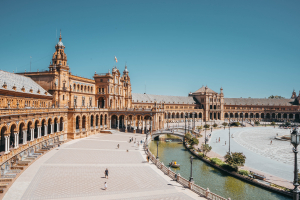 I was able to fulfill a bucket list promise to myself in 2012 when I studied abroad in Seville during my time at Truman State University. This time was different than the first. I was going over alone, without my mom, and I was staying for four months instead of nine days. I cried walking onto the plane at MCI. I was second-guessing every decision that led to that moment and I was completely in over my head but it was the best decision I ever made.

While living abroad I was able to grow as an individual, as an American, and as a human being. I learned life skills such as money management, budgeting, conversational skills, how to live on my own, and how to say “no” when a situation didn’t feel right. I learned that young people in other countries were more aware of what was going on in the U.S. than I was. In those four months, I learned just as much about America and Americans than I did when I was in school. However, the most important thing I learned was that we’re all just people wanting to live our lives without being treated poorly, judged, or hated. We are more alike than different, and that mentality has led me to where I am today.

Since then, I have been able to build on the skills and knowledge I gained abroad to launch myself into adulthood and begin my career in international relations. I am thankful for my time in Spain. It has changed my life forever, and it will always have a special place in my heart.

About the AuthorRachel White is the new Program Coordinator at the IRC. She received her BA from Truman State University and was able to study abroad in Seville, Spain, and Angers, France. Her favorite hobby is making travel plans because she always needs something to look forward to.