From China to Vietnam, with Love

I was fortunate enough to visit my girlfriend’s home country during the winter break. Vietnam is a beautiful country in Southeast Asia, just a five hour flight away from the city where I was born in Shanghai, China. This is a very large step in anyone’s relationship, but especially in the Chinese and Vietnamese culture.

Vietnam’s culture and history are very diverse. On the streets of Ho Chi Minh City, you can see the results of the fusion of Eastern and Western cultures, and the buildings that were left over during the French colonial period in the city center. Vietnamese sandwiches are one of the local favorites for breakfast. It consists of a French baguette, Vietnamese-style grilled pork, local coriander, and pickled radish. This sandwich has a Western appearance and an Asian flavor. This combination made me unable to stop eating! The first thing to do after getting up every morning is to buy one on the street cart. In Vietnam, this situation went on every day for my six-day trip. 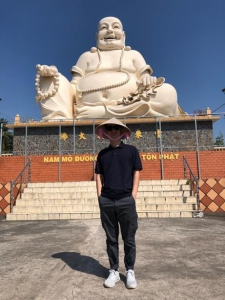 Meeting Anna’s parents was undoubtedly the thing that made me most nervous. Fortunately, Vietnam and China have similar cultures, especially young people who have Chinese parental respect for the older generation. Before I went to Vietnam, my father in China told me some tips when he met my grandparents from my mom’s side, which worked well. When drinking green tea with her dad I should always refill tea for him. The younger generation is to be quiet and listen when parents talk. These behaviors left a good impression on her parents. When I was leaving Vietnam, they repeatedly told me to come to Vietnam again when I have free time again. Even now, whenever I think of my trip to Vietnam, their enthusiasm touches me and makes me feel very grateful.

My time in Vietnam was the end of the year and very close to the lunar new year. Anna told me that every family in Vietnam will buy a very large watermelon to share with the whole family in the New Year. This seemed unacceptable to me. More than 20 years of life experience made me equate New Year and Winter, but watermelon is obviously the product of summer. It’s like letting Chicagoans go to Australia in the southern hemisphere for Christmas and say “Merry Christmas” to each other while turning on the air conditioner and eating ice cream. However, the beauty of travel is that it will subvert your perception of the world and traditions and let people understand each other. From the northern hemisphere, I learned that in the consciousness of Australians and Vietnamese, New Year is equal to summer.

About the Author
Kevin Guo is a former Events Intern at the International Relations Council. He is a junior at the University of Kansas, where he is pursuing a double major in Global and International Studies and Economics.