A Step Into a New Horizon

As an international student barely spending less than eight months in the United States, I was beyond nervous to face a bigger and unfamiliar crowd, Midwest Model UN conference, which was far different from my small college. MMUN is an academic event/forum held annually that provides an insight on how the UN operates as well as promotes a deeper understanding of issues in connection to humanitarian, cultural, social, economic, legal and political problems that exist all over the world. By attending this program, delegates learn and develop leadership, research, public speaking, debating and so many other skills relating to diplomacy. 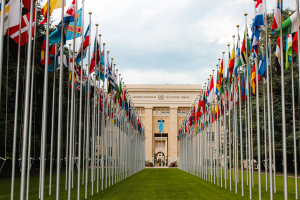 I knew that with my major being International Relations and Affairs, I could not walk away from such a tremendous opportunity. This was my chance to experience and gain knowledge about the UN which I hope to work for after college. As such, I put in extra work to research and learn more about Morocco which was the country my team was representing. To me, I found it interesting and delightful learning about another African country beside mine: Ghana.

Not only did I need to research about Morocco but also, the topic assigned to the committee I was in. Doing so creates a better connection and clarification on the stance of the country being represented. There are times that I didn’t find an instant response of how Morocco would handle an affair directly but researching about the measures/actions taken by the country led me to knowing the stance to be likely taken.

Even though I had taken a class to prepare me for MMUN, I felt really out of place. It was a brand new experience walking into the conference. Slowly, my team and I were separated into our various committees and I was left alone. Yes, it did feel like a nightmare just walking into the fourth committee. I was shy to speak and only shared my opinions during unmoderated caucuses where my views were asked on the topics. I had just a few resolutions in mind but after I had spoken about it, I didn’t really have much to say. Instead, I decided to collaborate with other countries and build policies with them.

Toward the end of the conference, there was no room for nervousness. I formed alliances and strongly expressed the beliefs of Morocco. I was rewarded at my first conference with a wealth of knowledge that assisted me greatly. My second time at the conference was much better since I wasn’t confused and nervous like my first time. I knew more about parliamentary procedures and I spoke during both moderated and unmoderated caucuses. I had so much fun and made new friends as well as reconnected with old friends from the first conference. Attending the program certainly helps develop skills but it also helps find lifetime connections with people. Till this day, I’m still in contact with those very same friends.