A Peek Behind the Washington Curtain

I went to Washington from the heart of the Midwest from Kansas City, where I’ve named my car Dorothy and where, as you know, we don’t really have swamps, real or fabled. I, like many other student interns, had no idea what to expect last summer. I researched and I prepared, but when I arrived on the doorstep of Washington I really only knew just how badly I wanted to excel.

I was set to intern at the Association of Diplomatic Studies & Training (ADST), a nonprofit which records the oral histories of diplomats and their family members, facilitates the preparation and publication of diplomatic books and memoirs, and supports the work of the Foreign Service Institute. I’ve known that I want to be a diplomat for years, but what is a diplomat? How do you become one? Like many of the careers in the capitol, there’s no recipe to follow, no linear path. But through my internship, I was fortunate enough to figure some of it out, spending my entire summer deeply immersed in the experiences of American diplomats across history. I helped conduct interviews with retired diplomats, researched through archives, and became familiar not only with the process of conducting and saving valuable oral histories, but with State Department culture, protocol, and personnel.

As I helped ADST produce its “Moments In Diplomatic History,” I got to know the stories of diplomats like William, who organized a national tour of the United States for Soviet astronauts in 1969. Of Margaret, who, prior to her diplomatic career, worked as NBC’s first female radio correspondent during WWII. There was Robert, who found a unique way to keep snow plowed at the American embassy in Moscow.  Judith, who stood in as an understudy for the American First Lady at an international conference. Then there was Bruce, who survived the Iranian Hostage Crisis, and Jan, who fought for the rights of LGBTQ people in the federal government.

Looking back, I can say with great confidence that my experience was nothing short of amazing serendipitous, even. I even came back with my very own unique “Moment in Diplomatic History” that perhaps, if I’m lucky, some intern will write about one day. A few weeks in, I was invited by my mentor to tour her workplace. I happened to have a networking event in her building that morning, so the timing could not have been more perfect. After my event, she escorted me upstairs, showed me the conference rooms, personally introduced me to the other staff members, and took a few minutes to show me her boss’ personal office.

That building was the Department of State Headquarters — that boss, the Secretary of State. There I was, Dorothy from Kansas, standing in the middle of Mahogany Row, in rooms where treaties are signed, bilateral negotiations are held, and where foreign dignitaries visit for tea — where few normally go, let alone a contractor’s intern. Yet for a few moments, I was able to take a peek behind the curtain — and as it turns out, this wizard has a mini-fridge exclusively dedicated to Diet Cokes, Kansas memorabilia in his office, and some of the same books on foreign relations on his shelves as I do on mine. As it turns out, Oz and home actually have quite a bit in common. 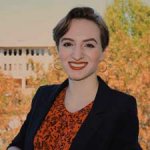 Natalie Friend is an IRC Global Education Intern and a recent graduate of the University of Arkansas, where she triple-majored in International Studies, French, and Political Science. Her primary areas of interest are diplomacy and international conflict negotiation. Her regional interest in Northern Africa was inspired by eight years of classroom French and a summer studying abroad in France alongside a year and a half of Modern Standard Arabic and a regional specialization in the Middle East. While at the university, she was heavily involved in residential student leadership initiatives, the Pi Sigma Alpha Political Science Honorary Society, and international student mentorship and outreach programs like the International Culture Team. Natalie has previously interned in Washington D.C. for the Association of Diplomatic Studies & Training, an oral histories nonprofit that works directly with former State Department employees. In her free time this spring, Natalie is looking forward to spending time with her family, exploring her newfound passion for yoga, and studying for the Foreign Service Exam.