A Kansas Citian’s Visit to Iran

This blog was written in early October 2019, before the events of recent days.

“Where are you from?” This was the quizzical look on the Iranian people’s faces and what they really meant was, “if you are from the U.S., how did you get a visa to come to Iran?”. We said yes, we are from the U.S. “We love Americans” was the constant rejoiner. To that, we said, “We apologize for what our administration has done to your people.”

On September 26th, a group of four of our Global Exchange Tour arrived in Tehran for a 14-day tour of Iran traveling some 2,000 miles to Yazd, Shiraz, and Esfahan. We knew that Iran was the cradle of civilization but we did not realize that its roots go back as far as 10,000 years. In that time, Iran has survived 22 civilizations and six dynasties. 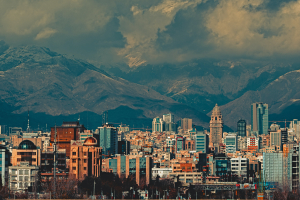 Iran was not on my list of countries to visit, but when a good friend at the Mathematics and Computer Sciences Department at American University said she wanted to visit her Doctoral students, I jumped at the chance. The more I read, the more committed I was to going and found a tour with Global Exchange that had a trip in the works. In the meantime, I found a friend who really wanted to go to Iran and soon Kansas City social worker Kathleen Kennedy had signed on. That was in the spring of 2019.

As the international geopolitical game of chicken between the U.S. and Iran became part of our daily news frenzy, Kathleen and I lost hope that we would get visas and be able to go. Our guess is that because of our Global Exchange’s on-the-ground travel agent Passargad Tours has good working relations with Iranian government and our State Department, we were fortunate enough to be given visas. Iran could use more tourists and it would help counterbalance that our sanctions have done to their people.

We heard from many sources that the sanctions have had a serious effect on their economy and the public’s ability to get necessary medications. U.S.-imposed sanctions on Iran and our US President’s withdrawal from the Paris Climate Agreement was continuing to have a devastating impact on the poor and the middle class.

We also witnessed the challenges the people experienced everyday like traffic in Tehran. A city of over 8 million people and 10,000 motorbikes. These bikes often carried two or three people on them, often with no helmets. Watching the traffic was like viewing a social phenomenon, cars moving in a seemingly random, yet understood order. It is certainly worthy of a documentary.

In Yazd, we discovered how the ancient civilization figured out how to create water system that piped water from the mountains down to the city. The system, or “Qanat” continues to provide water in this arid California-like climate.

Yazd was the city where we discovered the early beginning of the influence of Zoroastrianism. This ancient religion has a center of worship in the city, where we witnessed the Zoroastrian Fire Temple, where a fire that has been burning for the past 1,500 years. This was the religion of Cyrus the Great, whose burial grounds we visited. In a museum, we saw a large vase-like pot that had the first known inscriptions of a human rights creed. Zoroastrian ethic included a ban on slavery and the concept of ruling through love rather than fear. Zoroastrian beliefs have influenced Jewish and Christian faith traditions.

As we visited the cities, we (Kathleen and I being social workers) kept asking where the poor people were. Why we did not see anyone at the street corners asking for money, or homeless people camped out under the bridges, or drunken people meandering down the side streets? The answers we received from our travel guide and other people we spoke with at various stops along the way was that the homeless population but they are commonly taken in by families or non-profit organizations, Much to our surprise, we learned that guns are not allowed in Iran, which also increased our feeling of safety.

Esfahan has boulevards as impressive as those in Paris. The engineers who laid out the city did a remarkable job of structuring sidewalks (works of design not slabs of cement) and lined them with sycamore trees whose branches provided a leafy umbrella cover for the streets. We walked these boulevards at night to go to the lovely parks where families and groups were eating and sharing time together. UNESCO had marked this grand square as a World Heritage Site.

Of course, the Iranian food was a cuisine in a class all of its own. Slow cooking, nutritious vegetables, and spices like saffron and cardamom make all the difference. Pistachios from Iran are the best, and the flat breads were like none I have had in the U.S.

We spent considerable time in Persian Carpet stores looking at works of art and labors of love. The number of knots, the origin of the dyes, and the source of silk and wool all determine the value of the carpet. We also visited numerous masques and museums, where we learned about the great poets and the rich culture.

We learned that about 90 percent of Iranians practice Shi’ism, the official religion of Iran. At the mosque, we watched the men roll out the carpets for the men to worship on while the women were up in the parameters worshipping. We wore head coverings the whole time we were there, as was the law. At times there were scenes that reminded me of the 16th century in European towns where the fully covered religious women were walking down the streets. The only difference was that the women in chadors/hijab were listening on their cell phones and carrying stylish purses. What some women of each century have in common is that their outward dress reflects their relationship to God.

All of this makes a case for tourism, or as I like to think of it as “soft citizen diplomacy.”


Alice Kitchen is a Kansas City-based activist, perhaps most notably serving as the Co-Chair of the Women’s Equality Coalition.